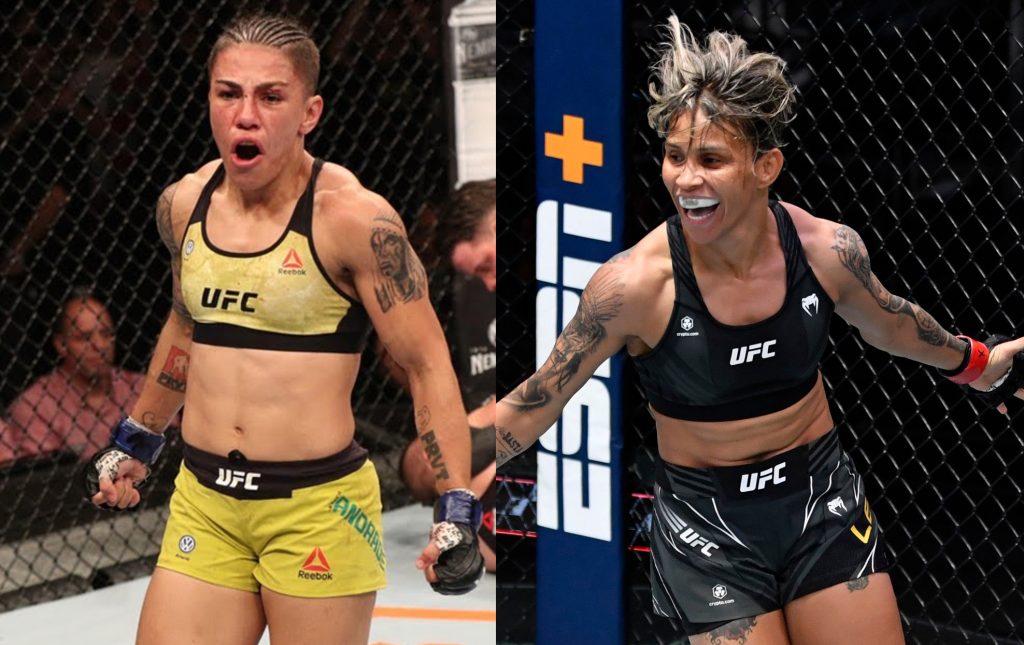 UFC Fight Night 205 takes place tonight, with the headliner between two strawweight contenders, Amanda Lemos and Jessica Andrade. Apart this one, there are several more bouts that might be interesting for the MMA fans, Guida VS Puelles being the top one.

Stay tuned with us for the next five minutes to check out what we prepared for you because it might be beneficial in the end.

Lemos is the new force in this division, with a record of 11 wins and one loss. That one was at her debut, back in 2017, once Leslie Smith KOd her in the second round. But after that, the Brazilian bounced back, posting five wins in a row, three of them via stoppage.

The one that earned her this fight was a split decision against Angela Hill in December 2021. From that moment on, Lemos became the possible challenger for Rose Namajunas. This battle is, according to many, the title-eliminator, and whoever wins it, will go on to face Namajunas.

Strawweights Amanda Lemos and Jessica Andrade face off in the #UFCVegas52 main event.

Lemos is long, athletic type who knows how to use her physical advantage. Knocking out Livia Renata Souza and Montserrat Ruiz in the first rounds is enough proof for that. Back in 2015, she was the Jungle Fight Women’s bantamweight champion, meaning that she knows to fight with heavier rivals. Lemos’ leg kicks are constant and very frustrating for the rivals, because she can keep launching them throughout the entire fight. Once the opponent slows down, she starts pounding with heavy punches.

Jessica Andrade is one of the perennial stars of the UFC. Once a champion of this division, and the challenger in the flyweight, Andrade decided that it is time for her to get back to the strawweight and give it another go.

Andrade lost to Valentina Shevchenko in the flyweight title fight in April 2021 and after that, she straightened up against Cynthia Calvillo knocking her out in the first round. Her background is fantastic, having fought with champions like Rose Namajunas, Zhang Weili, and Joanna Jedrzejczyk. Her battles with Namajunas are among the best in the division’s history, and many believe that this one is just an intro for another, the third contest between her and the champ.

“This division is amazing and there are a ton of fantastic matchups I could have while climbing my way back to the top.”

No matter what is happening, Jessica Andrade (@JessicaMMAPro) plans to roll with the punches and rack up wins. #UFCVegas52 ⤵️https://t.co/8NEfyFtvae

Raw power, mixed with aggressiveness, is Andrade’s biggest strength. She knows her way around in both stand-up or on the mat and is incredibly tough to control once she gets into the rhythm. She knows to close the gap against bigger fighters, though sometimes, speed is something that could bother her.

According to the bookies, Andrade is a solid favorite but not as confident as many would believe. For us, this is a present we have to take. It isn’t that frequent to see solid value in one pick, and in our opinion, Lemos is a bit overestimated in this matchup. Why? Well, simply, she never had an opponent close to Andrade’s caliber, and even though she has an impressive record, all that won’t mean a thing against the former champ.

Andrade will find a way to solve this rival and set the third fight between her and Namajunas. We predict a stoppage win, but that is a recommendation for those willing to take some risk. Our final pick is just Andrade’s victory.