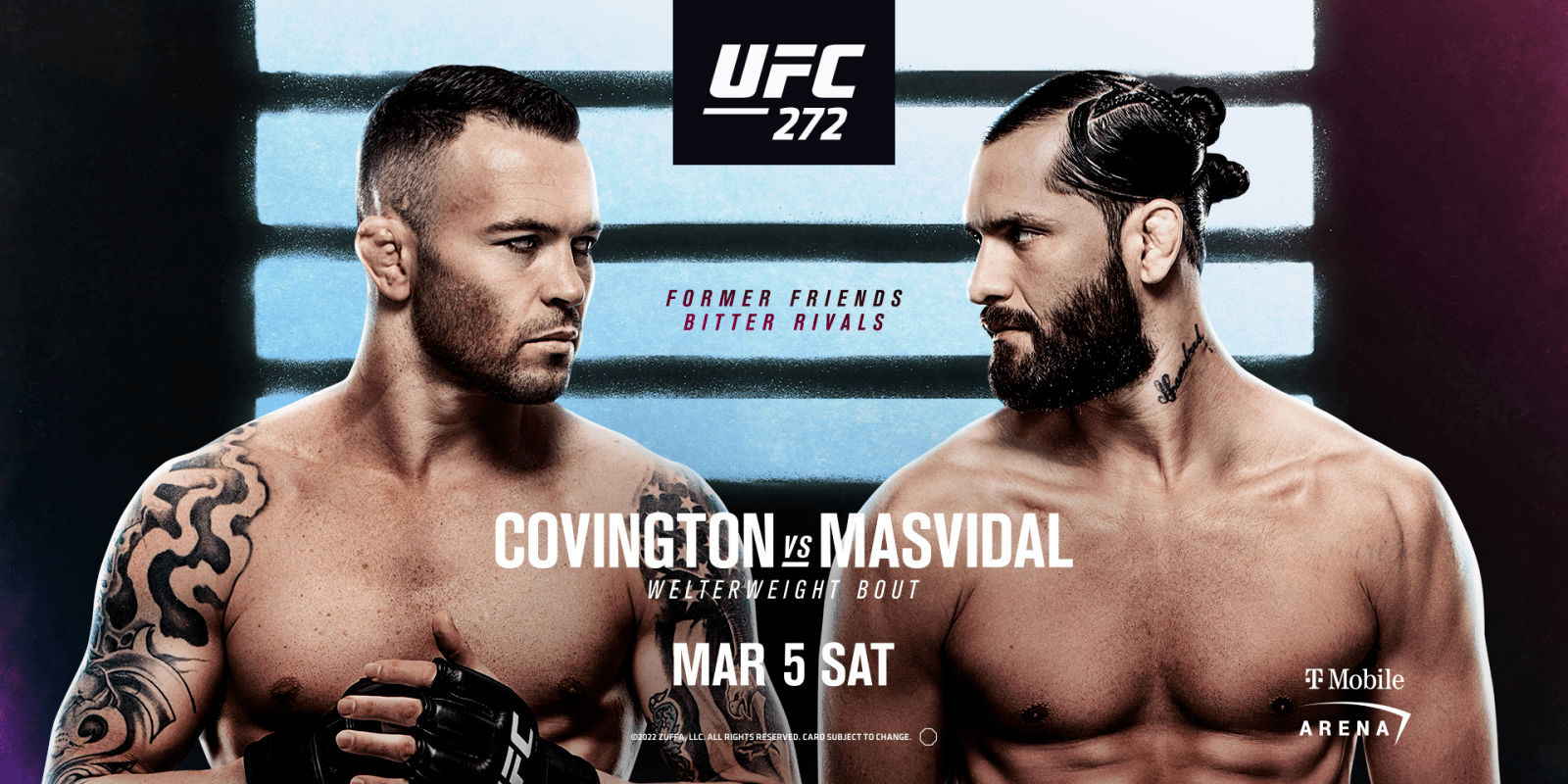 The battle between Colby Covington and Jorge Masvidal will be one of the biggest spectacles in the UFC this year. There is so much bad blood between these two guys that we don’t have the words to explain it. At first, they were best friends and sparring partners, who were in the corner for one another during the bouts. After a while, they split, and the trash talk began. As time went by, it intensified, and the beef between Jorge and Colby led up to a grudge match. That is why the FC 272 has to be in your notebook and why we had to make the preview of the same.

Colby comes into this event after a loss to Kamaru Usman in their second bout and another failed shot at the welterweight title. This time Colby ended the match, but the judges were unanimous in awarding Usman another victory over his fierce rival. However, that didn’t discourage Covington, who stated that he wouldn’t give up and come back even stronger to challenge Kamaru.

He is a strong puncher, who always goes forward in exchanges, and likes dirty boxing and wrestling. We will remind you that Covington used to wrestle in his youth days and had numerous trophies from those competitions. That’s why his strikes aren’t clean, as he still didn’t perfect the skills in this area.

What brought him up to this status is a fantastic gas tank. Covington is the only guy who can go toe-to-toe with Usman for five rounds. So far, the majority of his wins were either via decision or in the latter stages of the bout. Once he gets into the clinch, Colby starts wearing down the rival, who eventually has no energy left to restrain his late attacks.

Masvidal, or Gamebred, as the fans like to call him, is one of the most beloved faces in the UFC. He started from the bottom, the backyard fights and underground clubs to reach the heights just a few in the MMA world did. Even though he had a late rise, Masvidal managed to stay among the top welterweights for a while.

The one thing why everyone loves Masvidal is the fact that he won’t surrender at any cost, and up until the vicious KO loss to Usman, he was never submitted or KOd in the UFC. He finished all of his matches on feet, and those that saw him on the losing side were because of decisions. Meanwhile, he earned 16 KO victories, and that is something we have to mention.

Gamebred’s gas tank is solid as well, and even though he is a veteran of this sport, his chin is relatively solid. Now, do forget the KO vs. Usman because such things simply happen, and we can’t judge Masvidal solely on that. Striking is far better than Colby’s, and the number of KOs is pretty much proving this claim. Also, even though he was a street fighter, Masvidal learned decent wrestling, which helped him survive in the ring against guys who like to take their battle to the mat.

We are backing up Colby to win here because of his power, as he looks more muscular and physically tougher. He will wear down Masvidal with clinches and wrestling because Gamebred can’t compete with him in this area. That will undoubtedly take a lot of energy from Masvidal, who is primarily a standup fighter. We can’t predict whether he will finish the job before the final horn or via scoring, but we strongly believe in Covington’s victory in this event.