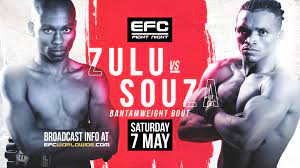 EFC is putting on their second Fight Night Show ever this weekend as EFC Fight Night 2 takes place at the EFC Performance Institute in Johannesburg. The main event should be a great one as there is little to choose between Nkazimulo Zulu and Gian Souza. Also on the card of note are bouts between Dyne van Wyk and Peris Githiga, and Masefi Ngoma and Robert Swanepoel.

The main event should steal the show here. Zulu Boy (13-5-0) and Souza (7-1-0) are both fighters looking to move into contender status in the bantamweight division. It is a battle of southpaw (Zulu) against Orthodox (Souza) with the South African having the advantage in height – he is four inches taller than the Brazilian and in reach where he has almost three inches more range.

Zulu – a former champion at both bantamweight and flyweight – has been struggling to find his focus. His issues with weight cutting at flyweight have seen him shut out of that division despite a win (followed by a defeat) at the hands of Luthando Biko. Biko – who lost the first fight when Zulu was overweight and thus ineligible to in the belt – has shut Zulu Boy out of any third match conversation, so bantamweight seems to be where the gold waits for the South African.

It would be foolish, however, to rule Souza out of this one. The Brazilian Jiu-Jitsu specialist has taken to the EFC octagon nicely and has his own sights on a title reign. While short in stature, Souza is all muscle and he has yet to be defeated in any way other than by decision. The 26-year-old has one submission win, two TKO/KO wins, and four wins when the fight goes all the way to the judges.

Zulu – a kickboxing specialist – offers a nice clash of styles in the main event. The 33-year-old is a striking machine, with eight of his 13 wins coming by TKO/KO. He also has no losses in this manner, being able to use his long legs to keep other strikers from getting in range. It is when the fight goes the distance that Zulu Boy is at his most vulnerable. His record of one win and four defeats at the hands of the judges is what has hurt him during his career.

This could go either way, but I like Souza to outlast Zulu Boy, outworking him and winning by decision at 9/10 with BetXchange.

Elsewhere on the card, there is a rising Swanepoel in the co-main. Bradley Swanepoel is 3-0 in his EFC career and quickly moving up the featherweight rankings. On a card featuring three Swanepoels, Bradley’s matchup with the always eccentric Tumisang Madiba (9-11) is the most interesting. Swanepoel should have enough to take down ‘The President’.

The women’s flyweight match is also one to watch for. Dayne ‘Quiet Storm’ van Wyk was electric in her winning debut and at 1-0 faces a newcomer looking to make her own mark in Peris Githiga of Kenya. Van Wyk was good enough to win a performance bonus in her debut and she should have too much for the ‘Iron Lady’ here on this night.