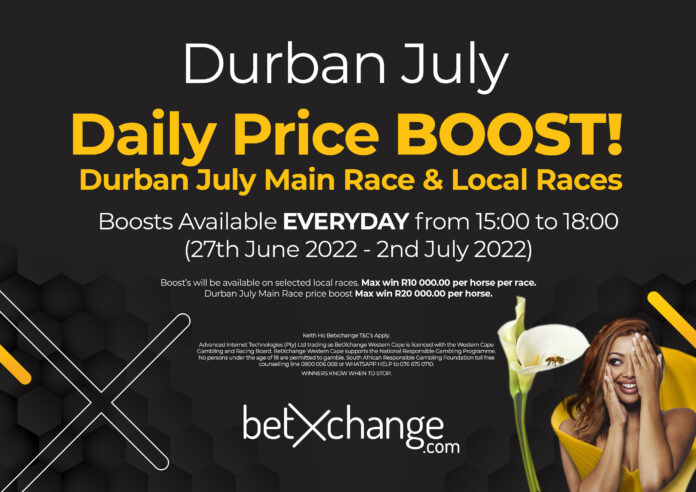 The biggest race day of the year in South Africa is fast approaching, but BetXchange has all bettors covered for the Durban July. The big race will take place at Greyville on Saturday, July 2nd, and will be run over a distance of 2200 meters. But, new and existing customers at the site can claim promotions in the week leading up to, and on the day of the Durban July. Among those included the Daily Price Boost.

What Is The Daily Price Boost?

The Daily Price Boost is a promotion offered at BetXchange that will be sure to capture the imagination of all horse racing bettors, as it isn’t limited to just the Durban July. Instead, the leading sportsbook will offer price boosts on selected local races and the Durban July itself.

This means that customers at the sportsbook will be able to get enhanced prices on popular selections for a limited time; meaning that greater returns could be collected should your selection get their nose over the line first.

How Do I Take Advantage?

Customers looking to take advantage of this excellent offer will need to check the BetXchange site between 3:00pm and 6:00pm daily to see the latest Daily Price Boost. All of the boosts will be taking place on the lead-up, and including Durban July day, between June 27th and July 2nd.

Of course, the Durban July will be the most popular race to take advantage of the promotion. But, bettors should be warned that their maximum return on their bet for the race in conjunction with the offer is R20000 per horse and per account holder. As mentioned, the promotion will also include local meetings in the lead-up to the big race to get bettors excited for the Durban July. Bets made on local races see a maximum winning sum of R10 000 per horse and per account when taking advantage of the BetXchange Price Boost.

There will be a number of intriguing dark horses to look at when it comes to making a wager on the Durban July this year. None may be as interesting at Sparkling Water for trainer Mike de Kock. This four-year-old hasn’t yet been able to get her nose over the line first in graded company, but she looks incredibly well-positioned to go one better after finishing second to Astrix by the narrowest of margins in the G1 The Premier’s Champions Challenge last time out.

Another that could be worth second consideration for the Durban July is Hoedspruit for Justin Snaith. This four-year-old looks incredibly well handicapped based on his best form, which included a victory by half a length over Crimson King in the G3 World Sports Betting Legal Eagle Stakes back in May.

Jet Dark is another for Snaith that looks primed for a competitive run this year after beating last year’s Durban winner, Kommetdieding, in the G1 Cape Town Met last time out. The four-year-old is also a previous Grade 1 winner at Greyville, as he captured the G1 World Pools Champions Cup last July.