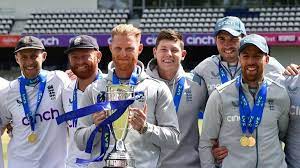 Well, this is a bit of a weird one. India is in England for a white ball tour this summer. Before the teams are about to get to their three T20Is and three ODIs, however, there is the small matter of a series-deciding fifth Test to play out at Edgbaston.

The genesis for this test was the Indian tour of England in August and September last year. India won the fourth Test to go 2-1 up in the series – the first Test was drawn – setting up the fifth Test in a situation where any result other than an England victory would result in a series win for India. If England could win the fifth Test, then the series would be a draw.

Then, on the eve of that final Test, Covid proved that it wasn’t yet done with the sporting world. There were initial thoughts that the Test would be completely canceled, but this tour – that had already been arranged – gave the perfect chance to play out the deciding fixture.

That is why the first ball of the fifth Test will be bowled almost 10 months since the last wicket fell in the series. Just another reminder of the crazy times that we have been through over the past couple of years.

Interestingly, the break has been better for England than for India. After the disaster that was the Ashes the England squad – and setup in generally – went through wholesale changes. The result is new energy, a new direction, and a new sense of pride in the long-format game. This was shown earlier this month as the England team dismantled New Zealand in a 3-0 clean sweep to get their summer off to the best possible start.

Jimmy Anderson is fighting his way back to fitness after a left ankle injury forced him to sit out the final Test against New Zealand. At 39 years old, Anderson is still as effective as ever with the ball and he will be anxious to get back into the side as quickly as possible given the momentum, they are building.

The Ben Stokes captaincy has got off to the perfect start and even a change in start time to 9:30 am – an hour earlier than the usual start time in a move to placate Indian broadcasters – isn’t dampening the spirits in camp.

For India, it is the captain Rohit Sharma who is the biggest worry in the days before the Test. Sharma – in a weird twist of irony – tested positive for Covid last week and is a doubt for this one pending his ability to test negative. Should he be ruled out, then it will likely be pacer Jaspit Bumrah who finds himself in charge, a position that he would be taking up for the very first time.

Sometimes sport is all about timing and the timing is in the favor of the hosts here. Expect England to ride the superb form of Jonny Bairstow at the crease to push them to a victory (at 19/20) that is 10 months in the making.